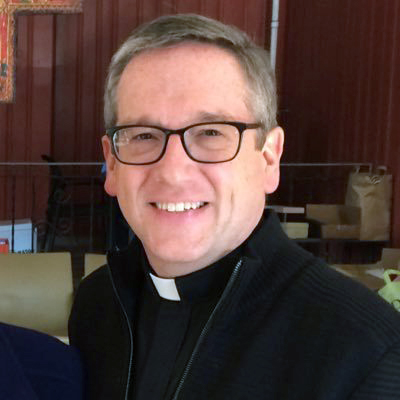 Father was ordained a Catholic Priest in 1990 and immediately began working with the Hispanic population in parishes throughout the Archdiocese of Philadelphia.

In 1999, Father was assigned to open a mission in Barceloneta, Puerto Rico, serving as Pastor of Nuestra Senora del Carmen Parish and establishing a Summer Formation Program for seminarians to learn Spanish and immerse themselves in the culture.

Upon his return, Father Liam served as Pastor for eight years at St. Patrick Parish in Norristown and then for four years at Assumption of the Blessed Virgin Mary Parish in West Grove.

In 2015, along with another priest, Father Liam opened a “storefront church” called Mother of Mercy House, in the Kensington section of Philadelphia. This site served as the Church’s presence in an area where all the parishes had closed. The ministry reached out to the poor, underprivileged, homeless and immigrants in the area.

While loving his ministry, Father Liam always felt a pull towards reaching out to those who felt rejected by or left out of the Church. He felt drawn towards the LGBTQ+ community, to those who were remarried and others who longed for communion with God and the Church, but were barred from God’s table. His desire was to truly welcome all to the Table of the Lord so that they could feast on Love and be nourished by Love in order to discover themselves as truly loved and as part of the Family of God. Then they could put their own gifts at the service of the People of God. After years of struggle and prayer, Father Liam discovered he could best answer this divine pull by ministering at a wonderful, all-inclusive place like Saint Miriam Parish Community.

Father Liam also relaxes by playing piano, talking walks in the city and enjoying the company of good friends.