A Life BY Grace, Not Rejection. 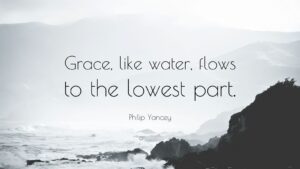 We gained a parishioner after my letter regarding abortion went viral! Yay!

We lost a parishioner after my image to honor Pride Month was posted! Oh no!

We are a fickle bunch, aren’t we? We certainly are, at the very least, used to a more commercial cafeteria church where we want what we want and when we don’t get our way, we leave. Worse, when we don’t like someone else, or the choices they made – under circumstances we might not even be able to endure – we leave, too.

Now, to be clear, I didn’t say – anywhere – that I endorsed abortion. What I said is that history has shown where you restrict access, people die. I’m pro-life, and live my life ministry caring for thousands annually, in my school, my parish and on the streets. I’ve sat as a nationally certified trauma chaplain with all kinds of dying people and I’ve reconciled mothers who aborted. My issue is that you cannot make this a “the ovum is fertilized so it’s done” argument. And you certainly cannot cover all circumstances with a law. (Look at the damage “Limbo” caused as Mother Church look to human construct to explain away a life unbaptized.) And let us look at the strict law just passed in Oklahoma- the most restrictive in the nation – it won’t cover Plan B, rape, incest, or medical emergencies, but shouldn’t it? After all, if you’re bringing to me ALL life in the womb – even genetically inferior or with known horrific malformations is to be kept alive than no, we won’t agree on a pro-life definition.

I’ve learned a long time ago; I DON’T have all the answers and I am NOT God, but I’ve stood in for Him where needed, holding the hands of mothers in horrible circumstances and no, I don’t believe the Holy Spirit was grieved; instead, God came – as God always does – through grace and unconditional love at the hands of a priest called to do nothing more. No life was wasted, no life was lost; that is where God takes over and I recognize I need God to be God and I go about my vocation bringing Him into the worst places. As to Mrs. Pelosi, I don’t know what’s in her heart, but I do know that she’s an elective representative of her people and she’s serving them to the best of her known ability and keeping her faith to herself. I’ll let her deal with her Creator. It’s simply beyond my pay grade.

I think where we get into real trouble is when we try to ensure that everyone is in a ‘state of grace’ as they approach the altar. (Now, let us be clear that we first alienate those we don’t like including the LGBTQ or the divorced or the Pelosis of the world!) But, in many people’s defining of ‘a state of grace’ they are not fully correct. So let us pause there by correcting one large — but very common — misunderstanding. Many define the “state of grace” as the absence of mortal sin, but this is a very minimalistic understanding. To grasp the beauty of living in the “state of grace,” we need a clear definition of “grace.” Simply — and perhaps shockingly — put as, “grace” is God! Grace actually transforms human beings, and as Father Kerper once said so shockingly well, turns us into “gods” by adoption! Through sanctifying grace, which is uncreated, God draws close to us, even to the point of union, somewhat like the marriage of a man and woman. The presence of this “grace” — God’s own life — then restores us to God’s own “image and likeness,” thereby empowering us to be become truly “God-like,” notably through mercy and love. This “state of grace,” which begins on earth at the moment of our Baptism into the life of God and His Church and then extends forever into eternity. So when God touches us through “grace”, we begin to share in His qualities, one of which is immortality.

Now, while we can’t have certainty, the regular practice of Confession is an enormous help (Reconciliation helps when one goes often, but few do). A frequent, thorough, and brutally honest examination of conscience will compel us to see habits, attitudes, and specific serious sins that pull us away from God’s goodness, thereby possibly blocking God’s life-giving grace. But, as I mentioned at the outset, the “state of grace” is not just merely the absence of sin; it’s also the amazing opportunity to live fully as a “deified” child of God, sharing fully in God’s life now and forever.

Our human weaknesses and brokenness allow us to call out the splinters in others’ eyes while we ignore the plank in our own. Now, we have been emboldened to shun people from church, too. I am often guilty too, so I strive to live by grace and knowing that I do NOT know what God knows. Otherwise, I would be God and have no need of Him.

No, sir, I will not accept that God rejected so easily. Therefore, as we approach Pentecost, perhaps we should welcome everyone to come, even when they are most in need, because I know God will meet them there…in grace.