The Ignorance of Faith. 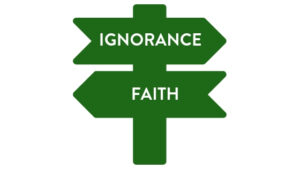 Saint Miriam has always recognized our imperfections. We, in fact, celebrate the cracks of our lives – and of our histories – and bring them weekly to the altar of God. All of us are welcome at a place of light and hope. All of us are permitted to reach out our feeble and broken hands to receive the hope that comes from the very Life and Presence of Christ found in the bread made Eucharist by the mystery of Gods church and her priests. There is no litmus test for receiving because we are all – if truthful with ourselves – unworthy.

Recently, the bishop of the Roman Catholic Church in the Diocese of Antwerp, interviewed by The Tablet Rome correspondent Christopher Lamb, spoke about the “dramatic” backlash among “mainly straight people” who saw the Vatican document calling LGBTQ persons ‘sin’ a step too far. He said that as many as 2,000 people had cancelled their baptismal registrations in the dioceses in Belgium (a traditionally strongly Catholic country.)

Back at home, in Kansas, Archbishop Joseph Naumann recently was quoted explaining why the U.S. bishops’ conference should draft a document that makes it clear Biden should not present himself for Communion. Naumann raises the issue of scandal and believes that Biden will lead other Catholics to sin. He told the AP: “It can create confusion. How can he say he’s a devout Catholic and he’s doing these things that are contrary to the church’s teaching?” Once again, the bishops are attempting to weaponize the Eucharist and they wonder aloud why younger people are leaving the church in droves.

President Biden is not performing abortions and he has never, at least to my knowledge, and I find it foolish to think that his receiving Communion will confuse anyone about what the church teaches regarding the evils of abortion. I do not know what goes through his mind when he stands in line for Holy Communion. I suspect, if he is like me, he thinks of how unworthy he is and that the responsibilities of his office awaken in him in humility. After all, he carries burdens most of us can only imagine and that he cannot really share with anyone. If he turns to the holy Mass for solace, strength, comfort, or perhaps even inspiration, (and certainly grace) than we are all better for his doing so.

A few weeks ago, we enjoyed receiving an application to become one of our teachers within our wonderful school. We have always placed the emphasis on accepting every child regardless of their ability to pay and certainly without any effort to discern what state they are in, or if they practice our faith (or any faith for that matter). We’ve always maintained that our job is to educate and through our actions, and as Saint Francis would remind us, if we do so then they will see the ‘gospel in action’ and perhaps wish to become one of us.

At any rate, a young woman applied who attended and graduated from the Franciscan University. We were so elated! I know well many of my brother friars at the university, and I also know well their standing on matters that affect the body of Christ. Much like us, they always endeavor to show common ground and love for neighbor and unconditional respect for all faith traditions. So, we were very excited to have this young lady come on board! Sadly, she lasted only a week. One day, she stopped one of our administrators and said, “I did not realize that you were not Roman Catholics and I’m going to have to quit. Being employed here is against my faith.”

I sat with this young lady in my office for no more than fifteen minutes to discern what her issues and her main objections would be to remaining employed at Saint Miriam. It took less than a few of those minutes to realize that no matter what I said she was always going to be correct, and we were always going to be wrong, and that her ignorance of our faith was very apparent; she believed only what she had been told in error.

This was sad to me, not just because she was going to be leaving us, but because she was leaving us over what was tantamount to a lie. She was believing the false rhetoric that the world has always been stunned by the Roman Catholic Church is the only valid church and all others are somehow defective and deficient. She is gone, but we remain in our good works continue.

The sacraments of the holy Church, by very definition, bring the Mystery of our faith into our mundane world. However, the effects of them remains a great Mystery and are hidden as clearly as the real presence of Christ in the Eucharist is hidden from our eyes each Sunday at Mass. It looks like bread, but it is far more.

A few years ago, during a question and answer session at an evening prayer service in Rome’s Evangelical Lutheran Church, the Pope urged the Lutheran woman, Anke de Bernardinis,  to “talk to the Lord” about receiving holy Communion “and then go forward”, but added that he “wouldn’t ever dare to allow this, because it’s not my competence.” In his response Pope Francis on the one hand stressed he would “never dare give permission” but then said it is up to individual consciences to decide. The Holy Father answered by firstly posing the question whether the Eucharist is the goal of walking together or acts as the sustenance (viaticum) of such a path. The answer, he said, should be left to theologians. Today, only a mere few years later, the Church is trying to forbid a mortal once again from grace and food for his journey.

If we are honest with ourselves, all Catholics should approach the Eucharist in fear and trembling. It is like the words “Thy will be done” in the Lord’s Prayer: We say them sometimes without thinking of their dreadful meaning when we should always ponder the crucified Christ when we utter those words. But we also should approach the Eucharist in hope and confidence, not fear that buckles our faith. However great our sins, God’s mercy is yet greater, otherwise why go? Why believe?

Biden is a sinner. I am a sinner because we all are sinners. To use some Holy Communion ‘fitness test’ as a means to assess the state of one’s soul requires seeing what it is difficult to detect in ourselves, let alone in another person. That is the real sin. God knows the state of the President’s soul. We must all pray that God’s grace is at work in the president’s soul — and invite him, a fellow Catholic, to pray the same for us. He would be welcome at Saint Miriam. Why? Because everyone is.

Imago Dei, we are all created in the image and likeness of God. Amen.