We Are Polluted. Can We Survive? 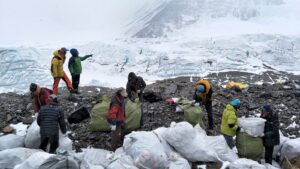 This morning I watched an episode of Blue’s Clues with Jameson after breakfast. There is a song that is sung by Josh called, The Imagination Song, that he sings together with Blue and Mr. Salt. It goes like this:

First you close your eyes and see it,

Then you swirl around to feel it,

Then you open your eyes, and you can see it there!

I think this is akin for me to where we are as individuals, a church, and even a nation. We have lost our ability to dream and imagine a better world. We focus on our differences that dive, rather than the words that are meant to heal and build community. Just look at what the Roman Catholic Church decided to spend their capital one: division and denigrating the LGBTQ community by calling them actual ‘sin’.

I guess we can’t hear the message of the Gospels any longer and just hear the cluttering of mind and chattering of the political world. In many ways, we have given up. I wonder if we can ever regain sanity. Perhaps this Lenten time of  being in the wilderness will give us all the opportunity to pause and reflect – to imagine again – and see if we can be the needed voice in the wilderness? Maybe more than just listen to the words of what it is to call oneself a Christian, but to be a Christian?

Piercing the sky at some 29,035 feet, for many, Mount Everest holds a significance as mysterious and unpredictable as the weather that shrouds its illustrious peak. Edmund Hillary and Tenzing Norgay were the first people known to reach the summit of Mount Everest back in 1953. It was a death-defying feat of endurance that captured the world’s imagination! Since then, hundreds of thousands of visitors have flocked to the mountain, and it is all starting to take a terrible toll. For the Sherpas, the tight-knit community whose name has become so deeply synonymous with Himalayan climbing, Mount Everest is a sacred place deserving of respect, but its popularity has polluted it. The two most common routes to the top, the North Ridge and the Southeast Ridge, are flecked with discarded items dropped during more than 9,000 successful summit climbs, as well as countless other attempts. There are spent oxygen canisters, abandoned tents, food containers, and discarded equipment sometimes left behind during emergency evacuations. The world’s highest mountain has turned it into a very tall garbage dump, strewn with rubbish, human waste and even bodies. In total, it is estimated that over 22,000 pounds of trash litters this beauty of this natural wonder.

I wonder if we see our own natural wonders – us – as being polluted by own actions or inactions. I wonder if we discard ourselves as easily as we do our parishes and other places that try so hard to point us to those ‘things eternal, rather than things that perish’ as we focus on the pollution of the world, and not the word of the Creator?

The pollution at Mount Everest has led to the contamination of the local watershed, which threatens the health of local people. Now, both governments and nongovernmental organizations (NGOs) have attempted—and are still attempting—to clean up the mess on Mount Everest. In the Tibetan language, Mount Everest is called “Chomolungma” (“Qomolangma” in Chinese), which means “goddess mother of the world.” There is hope that these organizations will be successful as they work hard and change the ways of others who fail to realize that what goes up, must come back down.

What about us? Can we imagine a better world again? Will we be so lucky at the end of this Lenten Season to find needed change and support on those things and those places that help us be better people; or, at the end of our lives will we have nothing but discarded attempts and failures strewn around what is left of us?